It's been such a long time, hasn't it? I haven't really done an update since the release for Escape From BioStation so I thought maybe it was an appropriate time to take a look back and write a post mortem of the game's development.

So sit back, and listen ye to the turbulent tale of how it came to exist!

Escape from BioStation had 2 very distinct incarnations, which essentially became 2 completely different games, only one of which wasn't terrible.

When I started on the first version of the game I was a green nooby game dev. I only had experience in making silly tiny stuff for friends in game maker. I wanted to use a new engine (Unity) for this, since I wanted it to be 3d. Therefore my initial planning was somewhat limited by what I could do in it. I had a key idea, which was small robot in a vast mysterious space station, to evoke the need to explore. The first concept was summed up as follows:

"An adventure platformer (with fps elements). setting: space and shit"

There was a little more planning that that. But those words are literally lifted from the initial planning document.

I went through what I thought was a very robust and thorough design process. I created a rough draft on what the finished game would be: Little levels which each had a physics puzzle. Each puzzle would be solved by getting a squirrel or other random key object.

So there were already two big mistakes:

So oblivious to the issues that already underpinned the project, I began designing these self contained puzzle levels.

An example of lack of direction was where I created the first level. I wanted it to just be flat out platforms and obstacles, nothing fancy, leaning on super retro feels. The next level then had a puzzle where there was a gate that would open when you tipped a scale that was just out of reach. This would be solved by finding a random squirrel, and using it to lob acorns onto the scale.
I hadn't planned on any acorn lobbing mechanics. I thought it would be fun, so in it went. At the time I was designing it I made a note to myself: Don't make it a shooter, this is only for a puzzle - otherwise people will compare it to other shooters and that's not what this is.
As soon as it was done though I made another puzzle using the squirrel that was basically shooting barrels that would otherwise prevent you getting past. I'd feature creeped a gun into my not-shooter despite my sternest warnings to myself.

Oblivious to this I went ahead and built a level that covered all of the core mechanics, moving, jumping, picking up stuff and lobbing acorns. This, I thought, would serve as a proof of concept.

I was excited to finish and ship a thing - just like proper people - so I decided to make the classic error of putting the "game" up on greenlight and kickstarter as soon as I had something I could show. At this point I had only completed a few rooms. There was no polish and looked like utter garbage.  Unsurprisingly it got very little traction. Greenlight votes were few and far between and there were only a handful of kickstarter backers (excluding my kind friends and family, that is).

After a few months of this I asked around for advice on how to boost interest. One suggestion was to get the demo in a bundle. I didn't really understand what I was doing, but I did it anyway.

So a small number of the public got a playable copy of this thing. Someone then did a lets play of it on the youtubes here. 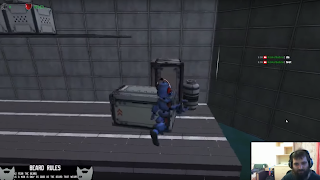 You can see it looks like crap and I'm surprised that this patient soul played it for as long as he did! (I have given him a free copy of the finished article by way of apology). But when I saw his video I was thoroughly ashamed of myself, and realised that I simply had to make this thing better. much better.

Back to the Drawing Board

The above was all completed in about 3 or 4 months, and I was intending to complete in about another 6.

I didn't carry on.

I'm sure if I finished the project as it was, the game would have been an embarrassing failure in every respect.
So instead what I did was discard the old work. I went back to the drawing board and revised fundamentally what the game was, determined to create something that was... well... better. This is where the second incarnation of Escape From BioStation was born.

So step 1 was that I wanted to spec out everything that would be in the game, what the rough story was, the environments, the mechanics and the sound. Essentially do a game design document. Based on this I could create a new rough plan.

The first key step in the plan was writing a good script. I had a rough idea of a story, so I drafted in a talented writer friend of mine and we co-wrote a good quality script. The plot points of the scripts were hung loosely on the main thematic locations I knew would exist, and a couple of the puzzles I had which were serviceable from the old project. But we still had to tackle the fundamental questions: Why is this robot on a space station? What is he doing? Why on earth does he need a squirrel? Who is the antagonist? I had a title at this point already so.... what is this robot escaping from? 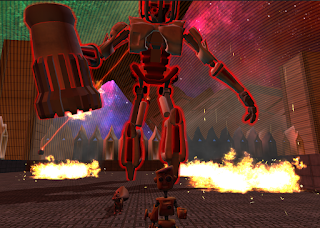 Having covered those points I could "join the dots" as it were, from the key plot points, and all the design decisions subsequently revolved around the script. As such it then became possible to write a plan which was detailed enough for me to stick to and end up with a decent product. This plan covered 18 months, but ended up taking over 30.

Here's my list of what went wrong and what went right:

Escape From BioStation was officially released on the 2nd of July 2017.

It went without a hitch! There were only 2 bugs that needed fixing after launch thanks to all the testing. I was half expecting there to be more but very happy there weren't.

The reception it got was good. Here's a nice review it got:
http://indiewatch.net/2017/07/09/escape-biostation-offers-nostalgic-platforming-cheeky-story-atomic-nuts/

It hasn't exactly flown off the shelves in terms of sales.  I could speculate that the reason for this was a number of things, maybe marketing budget that was too lean. Maybe I could have made the text on the steam storefront more sales-y sounding. Maybe it was something else about the page like the screen shots not being appealing or the video not showing off the game as well as it could. Maybe my distribution channel has been too limited. I think that the real cause is these things:

One of the best things in the process was that I was seeing people play the game from very early in the life cycle and it really made me concentrate on how people would interact with the game, and make sure that it flowed well, that the story made sense, and that it looked presentable.

A lot of the other challenges, such as the scope being too big or fumbling the release and building 2 games really came from inexperience, and not having released anything big before. I am sure that there will always be something to learn in any game development project, but some of my main hurdles with this project could have been easily overcome by not rushing as much and a good round of prototying.

If you liked the sound of that then Escape From BioStation is available to buy on Steam here:
http://store.steampowered.com/app/391650/Escape_From_BioStation/

Following some good rounds of beta testing, the date of the live release is being brought FORWARD - in what can only be described as an exciting and unprecedented move*.

The game will now be released on July the 3rd 2017

*Unless someone has done it before... I'll not check, and assume they haven't
Posted by Tusky at 03:35

Exciting news: Release date is confirmed for the 25th of July!

I think that in pretty much every announcement I've made I've said a later and later date... but this time I MEAN it!

It has continued to be a busy few months since the last update. Mostly just getting bugs fixed, but also all of the assets together for release on steam. It turns out you need a load of them - images for trading cards, backgrounds, achievements, badges and so on. Well that's all done now. Here's a bit of "cover" art I think looks neat:

Kickstarter rewards will be going out on the 18th of July.

Closed beta is going to start in the next few days. If you are interested in participating then please get in touch!

I'm delighted to announce that Escape from BioStation is now in the alpha testing phase!

You can check out the full article for the awesome kickstarter folks here: