Wow 3 months since the last update? That is pretty dismal. Sorry folks. Well I guess that does mean it's high time that I correct this oversight :)

First off is the simple "peasent" stand. It was on my todo list from the previous post, here is a picture of it in action. 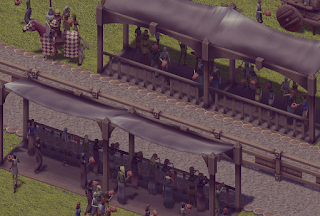 Visitors will want to spectate on the various tournament events if there is a stand like this to watch from. The stand has one upgrade at the moment - to add a canopy. At some stage weather will become a factor in how much a visitor enjoys watching the event, so this will become important. Even medieval folks didn't like getting wet!

More recently than that I completed a new apothecary outlet. This wheeled wagon will sell all kinds of tinctures and potions which will aid the knights in their bid to win the tourney. Once fully implemented it will be up to the player to kit out their knights with upgrades like this to give them the edge in jousting, melee and archery events. AI characters will also frequent outlets like this, so they are the main way to earn gold. 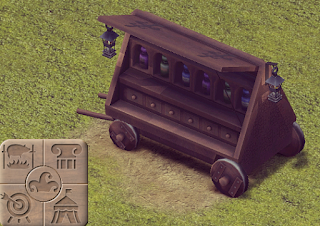 Apart from that, a fair bit of scenery at the edge of the level 1 tourney ground has been completed. For example a watermill, signs, a road and a selection of trees.

Not quite as intersting but I've made a lot of custom UI elements. You can see one in the apothecary image above, but also there is a rustic, wooden looking context menu for the buildings, and a leaderboard which remain docked to the view, so if you want you can track the progress of the competitors. I tried to tie everything in with the feel of a medieval tournament, hence the abundant wood. 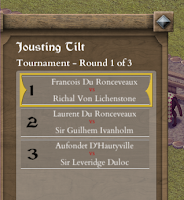 Well that's a whistlestop tour of the features that have been completed since the last time. Here's what I am targetting next:


So again apologies in the lack of updates. I'll adopt a better posting strategy from now on: Make a single post that I share to various outlets, because I am actully posting updates - just indiscriminately. e.g. twitter (at least every few days) a forum devlog that get updated every couple of weeks. Well I should just post that here too!
Posted by Tusky at 04:59 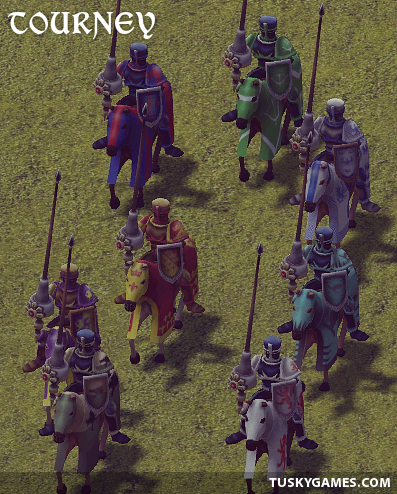 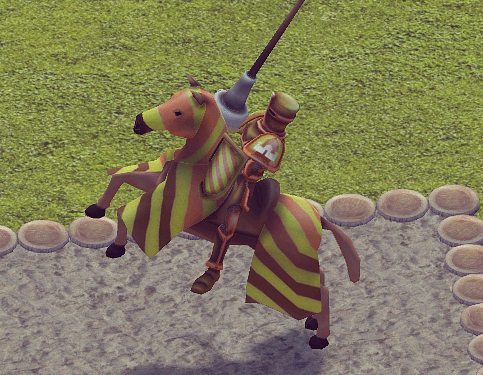 I'll be moving on to setting up some more of the 3d models. One being a tournament stand in which the medieval peasents can spectate on the tourney jousting fun!
Posted by Tusky at 07:15

Time for an update from the fledgling project! I've fleshed out more of what the mechanics will be, setting, theme and so on. So without further ado:


The project I am working on is going to be a medieval tournament sim game, which I am going to call "Tourney".


I have been applying lots of time and thought into establishing the setting for the game. I didn't know whether to make it exist in the real world or a fantasy one. Each has it's benefits. For example if it's complete fantasy then the world can be populated with any monsters, potions or lore I feel like. I decided not to do that since this game will be concerned specifically with the medieval tournament. I felt it would make sense that it existed in the real world a little.
That being said I thought I would cheat a tiny bit, and use a fantasy setting that is thought to be on Earth, such as Avalon or Atlantis. Visitors can then come from real places or made up ones. The player will know that at least to some extent it is not supposed to be completely historically accurate.


Along with (and completely dependent on) the musings about settings was the consideration about where the tourney visitors would come from. Medieval knights were often affiliated with a house. As a result I decided to come up with 13 playable houses. 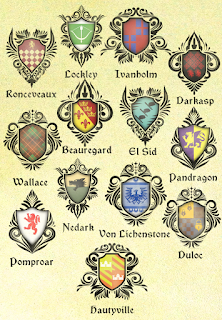 Each house is based on or references something in some way. For example some are based on real historical houses. Some are from Arthurian legend and a couple from pop culture. Each house will have a selection of knights you can summon to the tourney, and if you get the reference then you will know who your "star players" will be without having to experiment.


Now that is done, I need to make 13 varieties of textures for any knight related model (shield / horse / tent / armour) so that they all display the house heraldry. I am hoping that in doing this it will serve the same purpose in the game as it used to on the medieval battlefield, allowing commanders to be easily recognised amongst large armies.


I have also got a dev log thread over here on the Exilian forums, so if you'd like to comment or ask questions about this then please head over there and get involved. You'll also find a wealth of other creative game / art / writing content there so feel free to just go have a bit of a browse!

Anyway that's all for now. I'll cover a specific knight I've completed in more detail in a post next week.
Posted by Tusky at 12:06 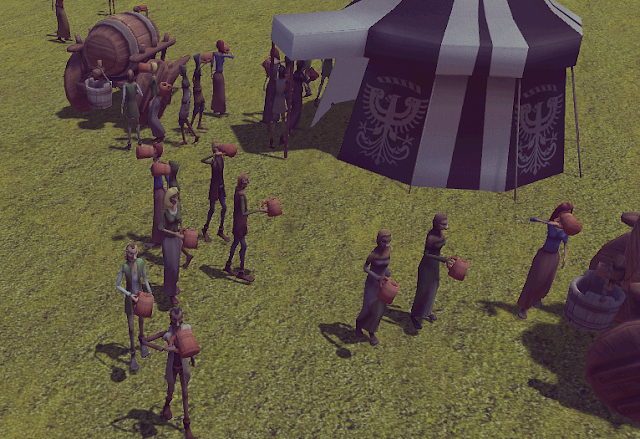 Well Escape From BioStation is released to the wild, and I've not really provided any update since, which is awfully rude, isn't it?

It would be untrue to say I've not done anything in the interim. On the contrary - I have been beavering away behind the scenes on the next project. However I wish to not reveal too much about it just yet. Even though I am absolutely dying to because I think it's going to be a whole truckload of fun.

The reason I'm "keeping a lid" on things would be clear if you have read my previous post. However to summarise:


So for now the only people I've told are my nearest and dearest. I think that when there is a sufficient cohesive thing to demonstrate I'll say what the game is because I am very excited about it. It really draws on the lessons I learned from biostation, and builds on them hugely - yet at the same time is a complete departure in terms of game style and theme.

I don't mind saying it will be a top down game set in medieval times. In the coming couple of months I will share shorter, more frequent posts just about the parts of the project I can demonstrate, for example 3d modelling or the top level framework of mechanics - and hopefully that may be of interest until there is some context to attach what I'm posting about to.

So for now, inbetween posts, I will be frequenting twitter droning on about abstract & contextless dev I'm doing and retweeting stuff of interest. So please feel free to say hi on there!