I'm targetting completion of the game in December - Q4 2017 is the date listed in various places like steam and indieDB so I do want to try and hit that. There isn't much in the way of "contingency" time left in the timeline, though, but I think it is achievable.

After months of attempting to find suitable times and means of getting the script down we finally got it done. There are still a few parts to fill in but at least at this point there is full voicing for the script. Once the talented sound engineer has had his way with the files then I can drop them into place within the levels and start on the cutscenes!

The main cutscene models are getting there. Here's the dastardly "Admiral Bonetopick" in front of his vessel the "SS Verybigship" 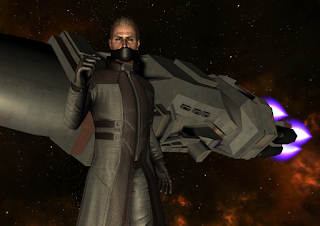 You now earn biobucks from your space station related antics. You spend them on various upgrades including, but not limited to, increased max health; a machine gun; a rocket launcher; and a spell that makes the enemies fight each other.

At the moment most of the background music is quite serene and suits general exploring or puzzle solving. However the game has frequent combat bits. It was clear that it wasn't suitable to have some relaxing dreamy music playing when you were frantically trying to blow things up. So what will happen now is that when combat starts the music will shift up a gear and suit what is happening a bit more. Alexei has got started on that and should have them completed in the next couple of weeks.

Playtesting the game up till now has been an eerie and silent experience, but no longer! It is full of explosions, footsteps and pew pew noises.

So that's in in terms of progress. It's actually a little bit more than I had planned to do which is encouraging for meeting the completion date. In September the key goal is to have the last full level completed. Also there are a lot of details that need to be filled in on some of the levels, since the initial set up was done in somewhat of a "broad strokes" way in order to have the structure in place.

That's all for now!