It’s been a while since the last update here. I have excuses though! It’s down to the busy end to last year caused by the kickstarter I talked about in the last post. Well the good news is [drumroll]

I have to say a massive thankyou to everyone that was able to support in whatever way you were able. Be it through a pledge or a share. I think it all made the difference because it was SO close! It’s good to be able to say that Tourney can proceed as planned.

Following the campaign, and the festive turkey-a-thon I’m back into dev mode, and the freelancers that the kickstarter was for are now underway as well.

My work has mostly entailed working on creating the final set of equipment available, that which is the “best” set. Here is sir Gybard sporting the top level medieval armour, a sword (borrowed from some fantasy game, it seems), a shield, bow and lance (I have unofficially dubbed this the big punchy lance) 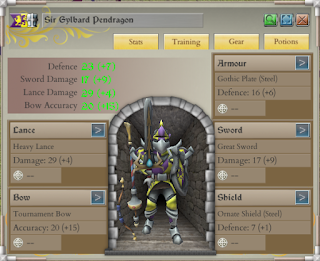 The above picture shows the top level stuff, but here are the others.

The simple version is the lowest level, and meant to resemble a medieval squire, like that knight has only just managed to ascend above the level of the lowly squire. Then tier 2 called “crusader” is more like a knight from the crusades. Paladin is then a heavier, rivet heavy version of the others.
Nobles
Something else that I’ve been working on is the addition of an additional class: nobility (previously there were only peasants in what I had done on tourney).
When adding the nobles I decided that they would have their own snooty requirements. For example I’ve already added the medieval style ale wagon - which is much loved by the peasants… but the nobles will turn up their noses at such sim swill. For them they would much rather buy wine from a wine merchant. Or, rather than buy tacky wooden swords from a carpenter like the peasants they would rather get fine jewelry from a medieval jewelry merchant wagon like this one! 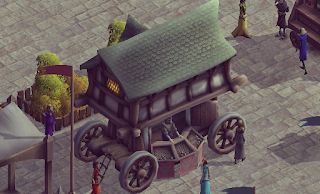 The dropoff vehicles now come in two flavours for each type, and the amount of people that get off to attend the tournament depends on how many different staff, outlets and stands that you built to cater to each!
Next up:
Guards and robbers
I had a bit of trouble thinking about how to balance doing a public dev log and at the same time fulfil the “backers only” kickstarter updates, so I’ve decided that there will be public updates like this one, that cover the basics of what’s been completed for the simulator, then a more detailed one only available to backers.

Greetings and well met one and all!

Well we're closing in on half way through the kickstarter. It's not far off  50% funded too. Great news for sure but with two and some weeks left - it is going to be a close thing as to if funding is successful!

To keep things going I have added a new pledge level on the campaign: The Patrician

Alongside the "main" campaign story which covers about 6 levels and 4 environment, there will be another mini story which will provide about an our of gaming. It will follow "Squire Plip", entering his first tourney and embarking on a journey to knighthood. This story will be available immediately to patrician level backers. Everyone else will have to wait and pay more. Also! These backers will have their names in the pool of names used when lord and lady visitors arrive.

I've still been making a little progress on the game itself, despite the campaign taking a lot of my time. The next item is a troubadour model, this is a member of staff that can be hired to entertain visitors with her lute. On the Kickstarter will be a backer only post which will go into detail about exactly how the model was put together and textured, and give a bit of a look at how I've tried to give the game it's look. 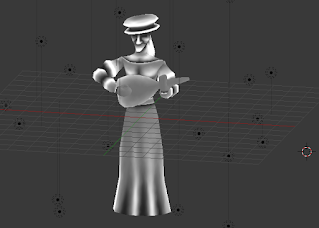 Anyway, lots to do so I must dash. I want to say a big thank you though to all that have pledged, or liked, or shared things about the project. It means a lot and you never know - may make all the difference!

The Tourney Kickstarter is live!

I am very happy to announce that the Tourney Kickstarter is now live!

It has been a great deal of work to get to this point. Now you can now pledge to support the game, and bag some cool rewards!

The campaign has been live for just of 2 days, and has so far gained a fair amount towards the goal, but there is still a way to go yet! The support from the community has been really fantastic, so I’d like to say a big thank you to everyone who has pledged, as well as to everyone who has shared it on their social media. Every like and retweet and share makes a huge difference!

I’ll be focused on Kickstarter for the next few weeks, juggling promotion and dev and comms and  everything else (#appropriategif) . However I will share updates about the game here - and how the campaign is doing.

Thank you all again for the support! Watch this space for further news!